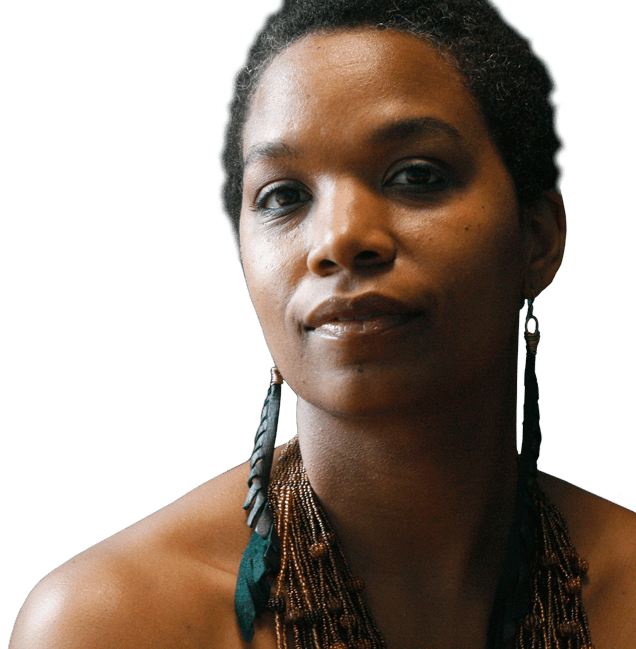 K. Ibura is a writer, painter, and traveler from New Orleans, Louisiana. The middle child of five, she grew up in a hardscrabble neighborhood with oak and fig trees, locusts and mosquitoes, cousins and neighbors. K. Ibura's work delves into spheres of human liberation, human connection, and evolution. She employs speculative fiction and creative nonfiction to take readers through mind-bending journeys into the transcendent, the mystical, and the fantastic. 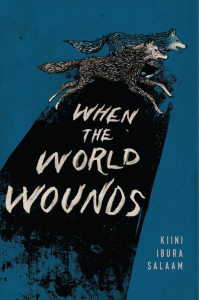 When the World Wounds

In this eagerly-awaited collection, K. Ibura continues her exploration of the dark, the sensual, and the mysterious with fiction that disturbs, delights, and dazzles. The five stories and one novella collected in When the World Wounds examine the tumultuous nature of the human condition through such wild imaginings as sensual encounters with deer, escapism in… » 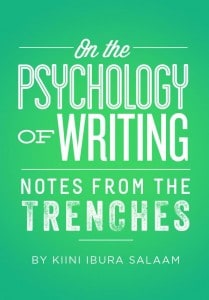 On the Psychology of Writing

Notes from the Trenches

K. Ibura has been writing essays and short stories since 1990. Over the years, she discovered that there’s much more to writing than sitting down and writing. There are a series of complex psychological and logistical demands that artists have to navigate to sustain artmaking on an ongoing basis. Is my work good enough? Does… » 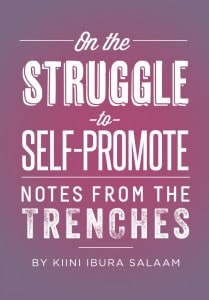 On the Struggle to Self-Promote

Notes From the Trenches

After over 20 years as a writer K. Ibura is fascinated by all the backstage psychological wrangling writers go through to sustain their careers. With a regular column on writing, K. has written almost 100 mini-essays exploring the nitty, gritty of what it takes to sustain a writing career. Salaam’s “Notes from the Trenches” series… »

K. Ibura is a writer and visual artist from New Orleans, Louisiana—which is the original home of the Chitimacha Tribe. The middle child of five, she grew up in a hardscrabble neighborhood full of oak and fig trees, locusts and mosquitoes, cousins and neighbors. The house no longer exists, having been reduced to rubble along with almost all of the houses in a six-block radius after the 2005 levee break in the Lower Ninth Ward.

A member of the first generation of post- segregation African Americans, K. grew up with creative parents who charted an independent cultural and intellectual path. Influenced by a childhood that was rich with art, music, and books, K. naturally gravitated toward reading and writing. She wrote her first professional story as a first-year student at Spelman College. After being paid $100 for the publication of that story, her identity as a writer was buoyed and she proclaimed herself a “serious” author.

K. Ibura’s work encompasses speculative fiction, creative nonfiction, and poetry. Her writing is rooted in speculative events, magical worlds, and women’s perspectives. Her speculative fiction has been included in such publications as: Dark Matter, Mojo: Conjure Stories, FEMSPEC, Ideomancer.com, infinitematrix.com and PodCastle.org. One of her earlier (and most distinctive) stories “Of Wings, Nectar, and Ancestors” was translated into Polish and her collection Ancient, Ancient was co-winner of the 2012 James Tiptree, Jr. Award. Her second collection, When the World Wounds, explores the human condition in the shadows of trauma.

K. Ibura’s creative nonfiction speaks to her two passions: the freedom of women and the freedom of the creative spirit. In essays about date rape, sexual harassment, and the power of the word no, K. explores the complex layers of societal norms that negatively impact women’s lives. These essays have been published in Essence, Ms., and Colonize This! Her article “Navigating to No,” sparked a spate of radio interviews, a television appearance, and a college seminar, as well as earned a personal commentary award from the National Association of Black Journalists. Her essay “No,” which appeared in both Ms. magazine and Utne Reader, was included in the Longman Publishers composition guide, Reading Into Writing. Her creative nonfiction has been included in college curricula in the areas of women’s studies, anthropology, history, and English.

For the past ten years, K. has written the KIS.list, an e-column that explores the writing life and encourages readers to fulfill their dreams. These posts have been collected in the Notes From the Trenches e-book series. She works as an editor and content director. She and her daughter live in Brooklyn, NY—the original home of the Lenape Tribe.

View All Blog
Previous
Next

Writing is such a solitary act. Building out a plan, sharing your goals, and connecting with others who are pushing themselves to create can make a huge difference. The 28-Day Writing Sprint is an accountability and support group providing a structured environment for setting and sharing goals, reporting on progress, reflecting on strategies, and growing… »

Vol. 112, The Discipline of Surrender 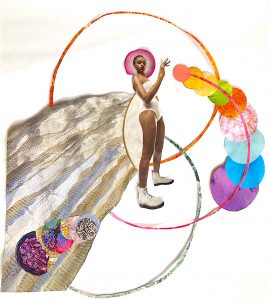 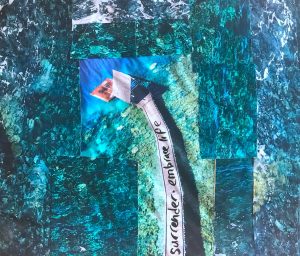 I went to the Met for the unveiling of Wangechi Mutu’s sculptures, which are now sitting proudly installed in four alcoves across the Met’s façade. These sculptures were created as the inaugural Facade Commission. These newly established project will commission an artist to develop sculptures to be displayed outside of the museum for a year…. »

“Come here.” Those two rustling words reverberated through Hemmie’s her dream, halting the cane leaves whipping in the wind over her and Nenah’s heads. She opened her eyes, shot up to sitting, and looked around the room. It was dark and empty. She fell back onto the mattress, threw a pillow over her face, and… »

Because of the Boneman

The rocks loved the touch of air on their sharp points. With the season of wet winds past and the mugginess swept away, the air was full of a delicious coolness that the rocks loved to bathe in. But a man—long and gangly—had draped himself over them, pressing his limbs into their gaps. They hated… »

He creeps up on me, quiet-like. A funky whisky scent invades me. “Hey, cutie.” He stands close. His scabs and scars make my skin crawl. When I take a step back, he scowls. “Why you actin scared, I jus wan talk to you. Maybe take you to a hotel.” One jittery look around shows me… »

Race: A discussion in 10 parts plus a few moments of unsubstantiated theory and one inarguable fact…

1.    Race is bullshit. A meaningless line drawn in sand by men bent on world domination and oppression. It was introduced as a fixed notion, an unchangeable, undeniable fact of world order. Yet from the moment of race’s conception, the amazing diversity of body types, cultures, and traditions on the African continent alone complicated race’s… »

When Conception Equals Confusion: The Battle Between Mothers and Would-Be Fathers

It happens in silence. A man—young, tall, hooded—sits in a waiting room. All the chairs are taken except the one diagonally across from him. A woman comes in carrying a child. She sits in the only seat available and busies herself removing the child’s coat and hat. The man’s eyes cut to the corner checking… »

“There’s No Racism Here?” A Black Woman in the Dominican Republic

When I first returned home from studying abroad, everyone wanted to know, “How was the Dominican Republic?” I was reluctant to respond. Masking the truth behind “fine’s” and “good’s,” I skirted my real feelings. “Did you like it?” is such a loaded question that it can’t be answered with a simple “yes” or “no.” For… »

View All Artwork
Previous
Next 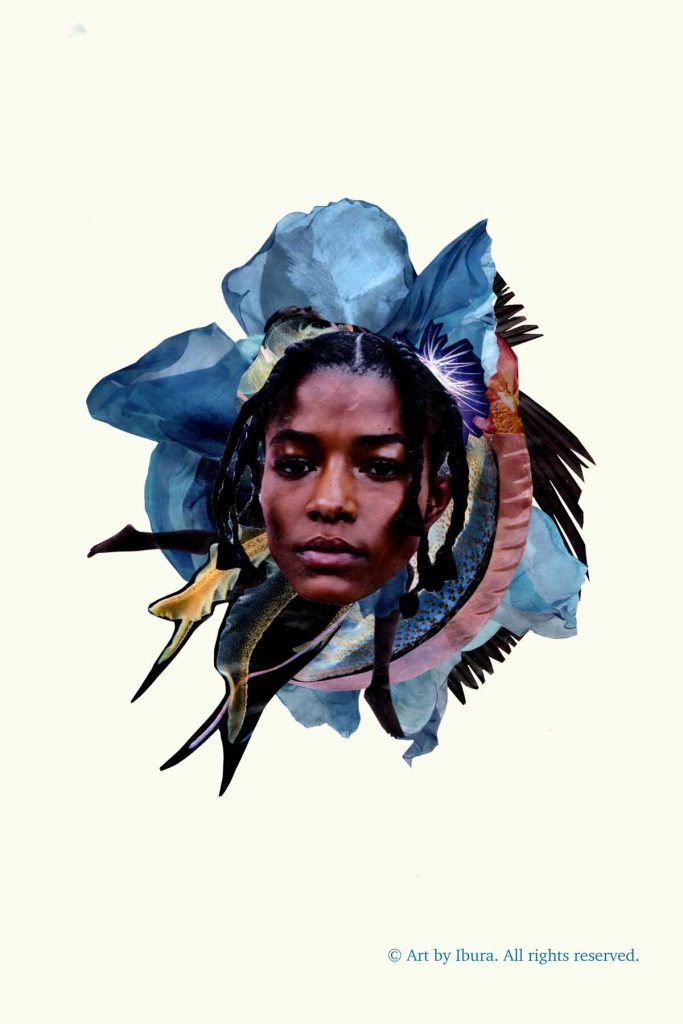 Visit etsy.com/shop/ArtByIbura to purchase a print.

Speculative Fiction and the Current Moment

Word of the Week, Episode 8: Float

The word of the week is FLOAT. Listen to the podcast to find out what floating has to do with writing.

I mentioned “Achieving With Ease” in the podcast. Here’s the blog post I wrote when I was wrestling with writing and working to find a way for continue to work under difficult circumstances. You can read it here.

When the World Wounds Book Trailer